A pharmacist since 1969, Michèle practiced her profession “behind the counter” with a passion until 2005. For the last several years, she has traveled the world, sharing her experiences with fellow pharmacists in countries such as Brazil, Russia, Tunisia, Poland and the Czech Republic. On September 11, 2008, Roselyne Bachelot-Narquin, Minister of Health and Sport, honored Michèle with the title of “Knight of the Legion of Honor.” Michèle continues to be active with several organizations, including Doctor Clown, an association in Lyon, France that works with sick children in hospitals.

Since receiving his pharmacy diplomacy at the age of 22, François has gained 28 years of experience in homeopathy. (He studied at the Center for Education and Development of Homeopathy [CEDH] while completing his pharmacy degree.) His career began at Boiron Laboratories during the company’s merger with LHF Laboratories (1987 to 1990); he then became the manager of the Boiron branch in the Toulouse region. François published his first book, “A Homeopathy Guide for the Pharmacist” (“Conseil homéopathique à l’officine”) in 2001, and he has been a CEDH teacher and the dean of homeopathic studies at the School of Pharmacy of Toulouse since 2002. At his own pharmacy, François specializes in working with patients suffering from serious conditions and uses homeopathy to help them relieve side effects caused by their chemotherapy and radiation therapy.

Boiron and Roux are co-authors of several reference books for practicing pharmacists.

After Michèle published her first book, “Homeopathy: An Every Day Guide” (“Homéopathie, le conseil au quotidian”), in 1996 with her colleague Alain Payre Ficot, and François published his in 2001, the writing of a new book, “Homeopathy and Pharmacy Prescription – 43 Clinical Situations” (“Homéopathie et Prescription officinale – 43 situations cliniques”), brought the two together. Published in 2008, this book helped pharmacists and their teams in 14 different countries further develop their knowledge of homeopathic medicines.

In 2012, Michèle and François agreed to publish eight titles with the publisher Moniteur for pharmacy use: “Files from the Expert at the Pharmacy” (“Les Dossiers de l’Expert à l’Officine”). Written in collaboration with medical specialists, these books target expert pharmacists. Two titles are currently available: “ORL” and “Anxiety Issues” (“Troubles anxieux”), and two more will soon be released: “Gynecology-Obstetrics” (“Gynecologie-Obstetrique”) and “Accompaniment in Oncology” (“Accompagnement en oncologie”). 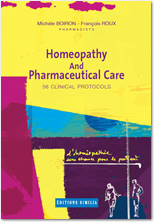 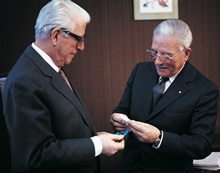 Boiron was founded in 1932 in Lyon, France, by twin brothers and pharmacists Jean and Henri Boiron. More about Boiron’s history in France and throughout the world can be found at www.boiron.com.